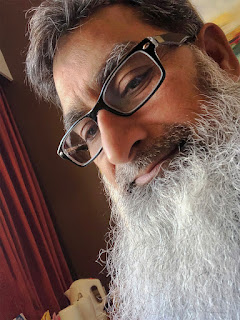 A G Khalid has been hailed as the guru to the majority of the graphic designers in the present generation in Pakistan. Many of saplings planted by him have grown into gigantic trees now. Most of his own creative designs have stood the test of the times. He surely is the living legend of the communication, design and graphic industry. He’s acclaimed to be the first person to have gained command in technology in Pakistan and then he passed on the skills to his contemporaries and students. He founded the graphic department in some of the most prestigious media organizations to be regarded as the trend-setter in the world of arts and design.

Starting his career as Art Director at Circuit Advertising, he was the creative link to have complemented the group of seasoned journalists who launched Newsline magazine with great fanfare in 1989. The following year he was lured to spearhead the Art department of The News as the Jang Group set off to bring about a revolution in newspaper trade. The logo of The News, designed by him, has continued to shine for many years even after he left the organization.

He was the Executive Director (Design) of The Carrot Company, the first state of the art production house to have pioneered the 2D graphic solution in Pakistan. He spearheaded Manhill Advertising and produced compelling designs for corporate. He then founded and headed the Art department of ARY Digital Television Network for four years before joining K & N Foods in 2004 where he has played momentous role in the phenomenal growth of the company, whose designs and products have remained market leaders for more than 15 years now.

At the KTF Education, he was engaged in teaching Pakistan’s first-ever software for desktop publishing and design. He then passed on the legacy to the new generation of artists by teaching them at the esteemed educational institutions like University of Karachi, SZABIST, Iqra University, Indus Valley School of Art & Architecture, Asian Institute of Fashion Design and Central Institute of Arts and Crafts.

Email ThisBlogThis!Share to TwitterShare to FacebookShare to Pinterest
Labels: A G Khalid