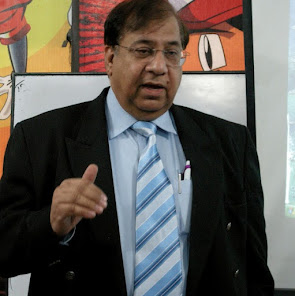 Arshad Khalil, one of the pioneers in the field of Information Technology in Pakistan, has mentored thousands of youngsters who have earned fame and recognition over the years.

He has been associated with graphics and IT related industry all his working life. A post graduate in business and commerce, he acquired education from the University of Karachi and the Institute of Chartered Accountant of Pakistan.

After completing education, he joined family business of manufacturing of printing types and after that of printing press and allied industries. He marketed Apple Computers hardware and software in Pakistan during 1990s. In this period was, he also involved in selling Agfa Image setters, Lushcer textile printing software and Wacom digitizers.

In 1990, his company had supplied Apple Computers to the Jang Group when they ventured in the publication of their iconic English newspaper ‘The News’ which possessed the first fully computerized set-up in the media industry of Pakistan.

Arshad Khalil introduced Arena Multimedia in Pakistan by opening the Shahrah-e-Faisal Centre and then attracted other entrepreneurs to invest in other Arena Multimedia Centers as Master Franchisee in the country.

Arena Multimedia is a chain of Multimedia training centers and has centers in Karachi and other cities of Pakistan, teaching Multimedia courses. They are credited to have revolutionized computer education, having trained thousands of personnel, the majority of whom enjoyed success in their professional life.

Arshad Khalil, an entrepreneur par excellence, still proudly owns and looks after the first Arena Multimedia Centre, besides being chairman of Jin Technologies (Pvt.) Ltd, a software export company, having offices in Islamabad, Multan and Karachi.