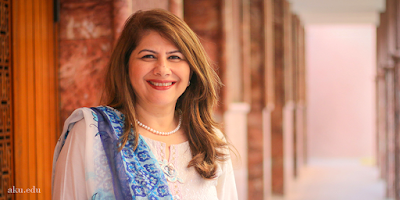 Dr Rozina Karmaliani is a longtime prominent member of the Aga Khan University, AKU. She is an alumna of the AKU School of Nursing and Midwifery (AKU-SONAM), where she did her Bachelor of Science in Nursing and diplomas in Midwifery and Nursing. She also holds degrees in Master of Public Health, Master of Science in Nursing and PhD in Nursing all from the University of Minnesota, USA.
Dr Karmaliani is the first SONAM alumna to obtain PhD in Nursing. She now serves as the Interim Dean and Professor at AKU-SONAM and a faculty member for the Medical College's Community Health Sciences.
Dr Karmaliani also holds the prestigous Kh​atijabai Mohan Manji Dharolia endowed Professorship. Before taking on the interim deanship for the second time on December 1, 2019, she has held various leadership positions in the School and has led its undergraduate and graduate programmes. She has been steering SONAM to use its institutional excellence to advance nursing, and to engage and develop leaders and educators in healthcare. Besides Pakistan, she has worked for the development and promotion of higher education in nursing in East Africa, Afghanistan, Syria and Egypt.
Dr Karmaliani has received the Juran Fellowship Award for "Leadership in Quality" and the "Distinguished Leadership Award for Internationals" from the University of Minnesota, amongst many others. She has also been a recipient of various national and international research grants. Dr Karmaliani's areas of research include women, child and adolescent health, with special focus on the prevention of gender-based violence, promoting mental health and preventing suicides from a health systems perspective. She has received various national and international research grants worth more than USD 4 million and has 50 plus peer-reviewed key publications in journals of international repute.
While SONAM enjoys the privilege of being the top nursing school in the region, Dr Karmaliani's leadership focuses on being a transformative force in improving health whilst developing and strengthening research capacity for the School, and further integrating research into education and practice. She is creating a shared vision for the School and empowering the faculty and staff to implement that vision. ​
Posted by Chief Editor at 11:23 AM