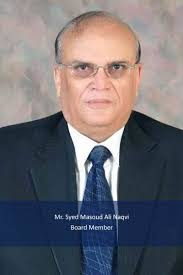 Mr. Masoud Ali Naqvi is a Fellow member of the Institute of Chartered Accountants of Pakistan (ICAP). He was the Senior Partner of KPMG Taseer Hadi & Co. till December 31, 2014 and thereafter served as Advisor of its Board from January 2015 to December 2017.

He has served as President of the ICAP for two terms and as Member of its Council and Committees for Review of Code of Corporate Governance 2002.

Mr. Naqvi is currently acting as Chairman of Tax Reforms Commission of Pakistan since September 2014 and Member of Tax Reforms Implementation Committee of FBR since January 2016.

He was the President of Management Association of Pakistan and Pak-American Cultural Centre as well as the Member of various Government Committees. He has also held honorary positions at various NGOs and welfare organizations such as Baitul Sukoon, Talent Inducement & Placement Society and other community projects and trusts.

In addition to being an independent director of Pakistan Stock Exchange Limited (PSX), Mr. Naqvi has been nominated by the Board as the Chairman of Audit Committee and as member of Regulatory Affairs Committee, Nomination Committee and IT Procurement Committee.
Posted by Chief Editor at 10:21 AM