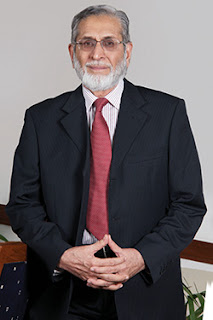 Mr. Ebrahim Qassim joined the Board of Directors of National Foods Limited in 2000. He served at a British Pharmaceutical Company in Pakistan for 3 years at different capacities finally as Country manager. Later Mr. Ebrahim Qassim set up his own distribution business by the name of Premier Distributors in 1971, which has now a well-established network throughout Pakistan.
He has also served as a member of the Board of Directors of the Karachi Stock Exchange in the year 2000. Presently, he is on the Board of Directors of English Biscuits Private Limited, Coronet Foods Private Limited and is also the Chairman of Shield Corporation Limited.
A Chartered Accountant by profession, Mr. Ebrahim Qassim has also been part of the National Council of the Institute of Chartered Accountants of Pakistan (ICAP) and the Marketing Association of Pakistan (MAP) in the past.
Report an Error   Edit or Expand
Posted by Chief Editor at 3:25 PM