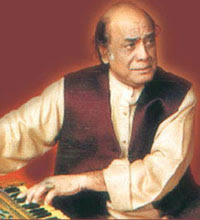 Mehdi Hassan was born in the village of Luna in Jhunjhunu district in Rajasthan, India in 1927 into a Shia Muslim family of traditional musicians. He claims to be the 16th generation of hereditary musicians hailing from the Kalawant.
He received his musical training under his father, Ustad Azeem Khan and his uncle Ustad Ismail Khan who were classical musicians, well-versed in the dhrupad style of singing. They instructed him in classical music and voice production within the framework of classical forms of thumri, dhrupad, khayal and dadra, from the age of eight.
Hassan started to perform at a young age and the first concert of dhrupad and kheyal with his elder brother is reported[by whom?] to have been held in Fazilka Bungla near Ferozepur[1]. After the Partition of India, 20-year-old Hassan and his family migrated to Pakistan and suffered severe financial hardships. To make ends meet, Hassan began working in a bicycle shop and later became a car and diesel tractor mechanic.
The struggle ended when Mehdi Hassan was given the opportunity to sing on Radio Pakistan in 1952, primarily as a thumri singer, which earned him recognition within the musical fraternity. At the time, Ustad Barkat Ali Khan, Begum Akhtar and Mukhtar Begum were considered the stalwarts of ghazal gayaki.

He also had a passion for Urdu poetry and began to experiment by singing ghazals on a part-time basis. He cites radio officers Z.A. Bukhari and Rafiq Anwar as additional influences in his progression as a ghazal singer.

Following a severe illness in the late 80s, Mehdi Hassan stepped down from playback singing. Later due to severity of his illness he completely departed from music. He now lives a secluded life in Karachi which he has made his permanent residence. Nevertheless he often visits Lahore where he spends most of his time with his children and other family members.
While he was singing in the Court of Nepal's King Shah Birendra Bir Bikram Shah Dev, he forgot the lines of his song "Zindagi mein to sabhii pyar kya kerte hain". Shah, then stood from his seat and start singing the next line.
He has been the recipient of numerous awards and recognitions: the Tamgha-i-Imtiaz granted to him by Gen Ayub Khan; the Pride of Performance bestowed on him by Gen Ziaul Haq; and the Hilal-i-Imtiaz conferred by Gen Pervez Musharraf. Besides the Nigar Film and Graduate Awards from Pakistan, he was presented the Saigal Award in Jalandhar, India, in 1979, whereas the Gorkha Dakshina Bahu Award was given to him in Nepal in 1983. Recently, he travelled to Dubai to receive yet another award.
(Source: Wikipedia)
Posted by Chief Editor at 7:10 PM