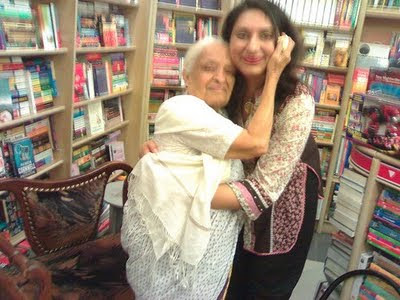 Born in Hyderabad, India, Fatima Suraiya Bajia has never attended a formal school, all her education took place at home, but she is ranked an eminent intellectual, Urdu novelist, playwright and drama writer of the country. The recipient of the Pride of Performance, she has also been awarded with various awards at home and abroad including Japan's highest civil award in recognition of her works. She also remained Advisor to the Chief Minister of Sindh.
Drama Writer Ms. Fatima Suriyya Bajia is a well-known personality in social welfare literary Radio, TV and Stage. She has been writing for PTV Centres Islamabad and Lahore since beginning. She wrote her first long play Mehman. She contributed for the literary programmes like Auraaq, and beauty care programmes under the title Aaraish-e-Khaam-e-Kakal and she also produced some children programmes.Following are her various some popular drama serials:-1. Shama (adopted from A.R.Khatoon's novel)2. Afshaan (do)3. Aroosa (do) 4. Zeenat (adopted from mirza Quleech Baig's sindhi novel ) 5. Aana6. Aagahi 7. Aageenay8. Tareekh-o-Tamseel9. Ghar aik Nagar 10. Faraz Aik Karz 11. Phool Rahi Sarsoon 12. Tasveer-e-Kainaat 13. Several children programmes and drama serialsShe produced great for Women programmes especially she is founder of "Khwateen key Meilaad".
Posted by Chief Editor at 2:46 PM