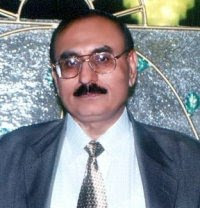 Dr. Jabbar Khattak Chief Editor & Publisher of leading Sindhi Language newspaper Daily Awami Awaz, Karachi. Born at Karachi on September 03, 1954, is an MBBS (1986) and was founder member of Democratic Students Federation (D.S.F.) During this period, he faced imprisonment for more than 4 years during General Zia-ul-Haq’s Military regime, for his struggle against Martial Law, for press freedom and other human rights.
He started his career in journalism in1972 along with his medical studies. He introduced modern information technology in Sindhi Journalism by publishing the first ever computer composed newspaper. Daily Awami Awaz, Karachi Which became the pioneer of new Sindhi Journalism. He also took active part in developing Sindhi word processing software and page making system in personal computer as well as Sindhi Unicode in XP Windows, and also by introducing man new Journalistic trends in Sindhi Journalism. These contributions are among many factors which made Sindhi print media as a popular media in the province of Sindh. He also formed the first ever Sindh News Agency i.e. Sindh Press International (S.P.I). He served All Pakistan Newspapers Society as a Joint Secretary from October 1996 to March 1999. He was also one of 3 members special Committee who took part in drafting the APNS recommendations for formation of Pakistan Press Council and for Registration of Press and Publication Law.
He was Secretary General of Council of Pakistan Newspaper Editors (CPNE) for the year 2003-04 and 2004-5, and Convener of Press Freedom Monitoring Committee of CPNE. He was elected Senior Vice President of CPNE for the Year 2006-07. He is founding member of South Asia Free Media Association (SAFMA) and Joint Secretary of SAFMA (Pakistan). He is also NGO activist and has an active role in many NGOs which are engaged in community development, legislative reforms, human rights, press freedom, women’s rights, gender equality, Public Health policy etc. He remained member of Advisory Board of Ministry of Population Planning, member of Health Formulary Committee, Govt. of Sindh WTO and Environment. He also remained member of Sub-Committee of Karachi Chamber of Commerce & Industry on Health, Education, WTO and Environment as well.
Posted by Chief Editor at 9:59 PM